The encyclopedia contain background information about the Riverlands and it`s inhabitants. None of this has any direct impact on how the game is played, but as a resource for imagination in the effort to make the world come alive. 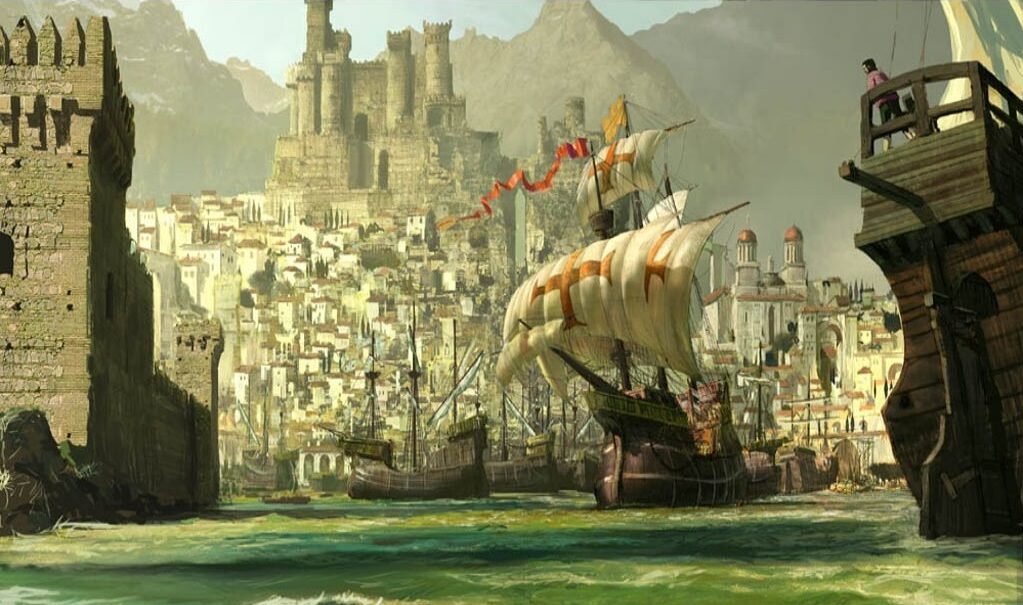 Amanôr is a city located on the temperate seashore, where the vegetation is thick. Amanôr grew around the mouth of a river, and is comprised mostly of humans. They are an overwhelmingly patriarchal capitalist oligarchic absolute monarchy many deities, the most common being Demeter, whose worshipers make up slightly over a third of the population. The nearest landmark is a tall rock formation with two boulders at the bottom… Totally not phallic… (It is). A population of 11030, the denizens live a modest existence. A pardoning of a prisoner is currently taking place.

The people of Amanôr work in exchange for payment from their employers, which they use to buy the necessities. Affairs are handled by the powerful few, the head of whom is Lady Renadra Biephon II

Trade in Amanôr is regulated, with taxes applied to all goods and services rendered, and people live a modest existence because of it. The trade guild enforces rules, with penalties for rule-breakers. Welfare is bad. Citizens can expect the bare minimum of death services. Healthcare and education are fringe cases, and citizens would do better to seek a private benefactor than try and receive treatment from the government.

The policing presence in Amanôr is more of a militia; some of the members of The Pikesmen of Glove are part time, and there is little need for the use of force outside of intruders.
Law in Amanôr is reform-based, and those that breach the laws can expect incarceration, fines, asylums, or work-release programs to provide them with the chance to not become a recidivist. The death penalty is reserved only for traitors to the state. Magic is not codified into the laws as anything specific, though the local guards would be more likely to treat it as a threat rather than not.

“The Grove of Open Stream”
Druids Grove (Quite Large)

“The Grove of Open Stream is a druids grove. It’s relatively new, and the quite large faction has an excellent reputation, and is motivated by love of nature. They are distrusted by those in power.”

It’s ruled by Caelyb West, who was able to oust the previous leadership. She is very incompetent, and her position is mostly stable due to internal power struggles. Bribes are sometimes accepted.

They have limitless resources. A fair few old favours are jealously guarded, as are a significant number of trade goods, a fair few contacts, sheafs of magic scrolls, and a handful of magical trinkets.

“The Heavenly Convent is a clergy church. It’s well established, and the quite large faction has an extremely poor reputation, and is motivated by devotion. They are for the current political regime.”

It’s ruled by a board of 10, who were the most charismatic of the group. They are quite incompetent, and their positions on the board are quite unstable due to internal power struggles. Their meetings are held once a fortnight, and are are held behind closed doors. Bribes to the board will usually be accepted.

They have limitless resources. A room full of magical weapons are in their proverbial warchest, as are a fair few favours, sheafs of blackmail material, a handful of magical trinkets, and a drawer of magic scrolls.

“The White Spears is a guards watch. It’s extremely old, and the huge action has an excellent reputation, and is motivated by fame. They are recently associated in allegations of bribery.”

Policing
Amanôr is policed by The White Spears, rather than a separate guard. The guard is underfunded, and their equipment is always in slight disrepair. Their officers are held accountable for their actions when public pressure fors for it, though The White Spears does not have the funding to perform training exercises.
One can recognise a member of The White Spears by the white and purple livery adorned with an image of a lion.

Law in Amanôr is reform-based, and those that breach the laws can expect incarceration, fines, asylums, or work-release programs to provide them with the chance to not become a recidivist. The death penalty is reserved only for traitors to the state.

It’s ruled by a committee of 3, who were able to rise to power by completing an ordeal. They are very incompetent, and their positions on the committee are relatively stable due to internal power struggles. Their meetings are held every third day, and are are not usually open to non-members. Bribes to the committee are scorned.

Members of The White Spears are identifiable by their distinctive headgear. Membership requires a display of bravery, and costs fifty gold pieces. The initiation into The White Spears involves a simple form to be filled.

They have limitless resources. A room full of artifacts are jealously guarded, as are binders full of magic scrolls, a significant number of magical trinkets, a fair few contacts, and binders full of blackmail material.

Amanôr is comprised mostly of humans.